On the Sunday 29th May 2011 David Benton & Nigel Sharp were declared the winners, the two specialists having fished well to catch 155lb 3oz of Bream & Carp. They had been pressed hard all the way by Mark Hurdle & Ben Ivory who finished second with 118lb and Ian Gray & Simon Walmsley who came third with 98lb 6oz of Bream, Roach, Perch and Rudd and Tench. The better specimens landed included a 16lb 1oz Common Carp, a 10lb Bream and 7lb 5oz Tench.

Ian Gray, Honorary Secretary of Farnham Angling Society, explained “This is the 11th year we have run the match to commemorate the late Mr Jack Frost, our previous Secretary, who gave 40-years service to the Society and who was an active charity worker.”

The winners of the match received complementary permits for next season. In addition, the junior & senior anglers raising the most sponsorship, those finishing in the second & third placed teams and those individuals landing the best specimens all won fishing tackle prizes that had been generously donated by the owners of Hampshire Tackle, Gold Valley Angling Centre, Nash Baits, Tackle Up, The Creel, Guildford Angling Centre, Backhurst Bait Supplies, Rokers Animal Feeds, Goldsworth Angling, Westfield Angling and Nigel Sharp. 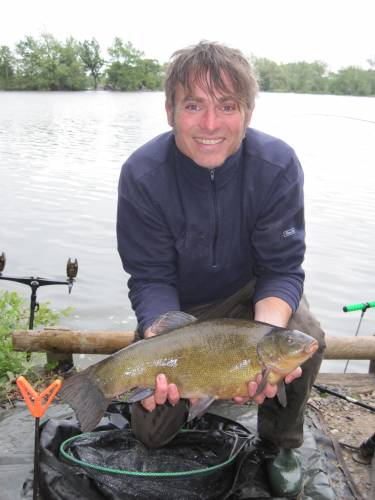 The Phyllis Tuckwell Hospice is the only adult hospice serving West Surrey and North East Hampshire. They care for seriously ill people and their families both at the Hospice and out in the local community. Their philosophy is about living, not dying, and understanding that the modern use of the word ‘hospice’ is about a specialist system of care across many professions in the community.

Ian Gray added “Our congratulations and thanks go to all of the anglers that took part and who helped raise over £3,000 in sponsorship this year. This brings the total raised since the matches began in 2000 to £28,995.11 in support of both the Phyllis Tuckwell Hospice in Farnham and the Second Chance Children’s Charity in Portsmouth!”

If you are interested in entering a pair for next years Charity Match, or in simply joining Farnham Angling Society which has fisheries throughout Surrey, Hampshire and Berkshire; please call Mick Borra (Membership Secretary) on 07546 724317.