Please note that bait boats are not allowed at Frensham Little Pond, as required by the National Trust.

Frensham Little Pond or Little Frensham or Frensham Small Pond (AKA Burton on Sea) played a significant part in the history of modern carp fishing, although the potential of the water is no longer a mystery known only to a few, the big Carp remain the prize for any member willing to put in the effort needed to capture them. In April 2013, the Frensham Little Pond bailiff team confirmed that there are 4-5 of the original Leney Carp, with one fish around the 40lb mark and the others between 27 – 35lb. In addition, there are around 30 of the fish stocked by Thames Water Authority Carp, of which 2 are around the 40lb mark with others up to 35lb. In addition, there are around 30 Burton Bradstock fish, that are around the 25 – 30lb + mark, these fish are mainly linears and fully scaled fish.

In addition to the Carp, there are Rudd to over 3lb 8oz that have been caught and Tench to 7lb + as well as some great Perch to over 3lb, plus some large Roach of 2lb + as well, there are also Pike up to 29lb, with most caught being much smaller in size. In the last 4 years, a number of smaller Carp have also been being caught by pleasure anglers, these are believed to have arisen from a successful spawning of the Burton Bradstock fish, as they are linears and fully scaled mirror carp.  Like Frensham Great Pond, this water is under a great deal of public pressure. Morning, evening and mid-week sessions are recommended.

Members are advised to avoid the beach and swimming areas on Summer weekends and Bank Holidays. A flushing toilet with drinking water for Member use only is located close to the beach area, see map, the code to access the key safe is in your handbook

Click through the image to to view the video that takes you for a walk around this venue: 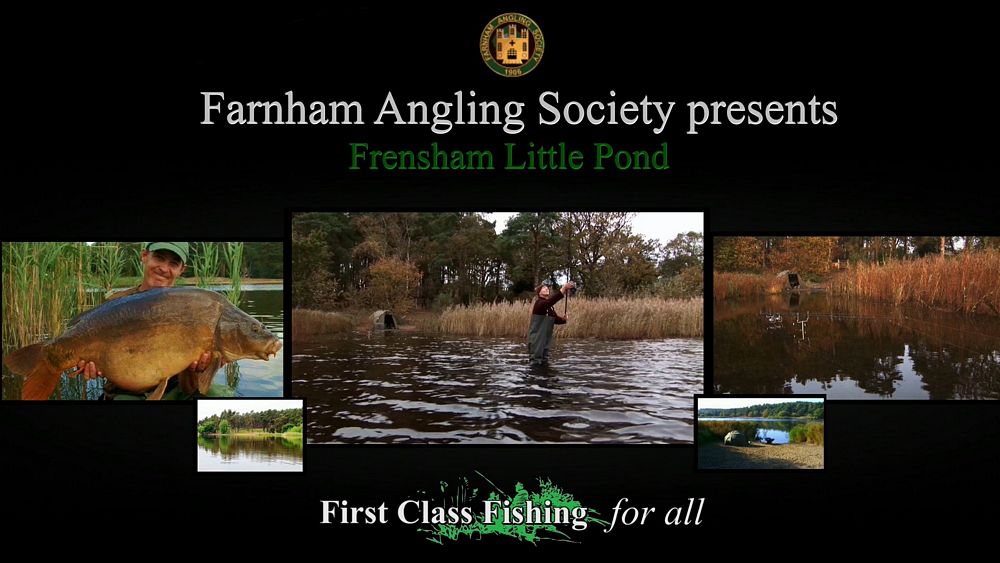 The fantastic Leney Carp on this venue respond to specialist tactics and have seen most presentations over the years and have learnt to avoid them!

Location has to be the key and care in disguising your presentation should result in some memorable captures.

The Rudd are rarely fished for, yet respond well to the usual surface tactics of spraying maggots and a shallow presentation.

Go after Tench with the feeder or waggler and maggots or worms for best results, especially early in the season.

Winter fishing for the Pike can be very rewarding with dead baits presented near the reeds a killer method.

As for Frensham Great Pond, take the A287 travelling south from Farnham. Follow this road to Millbridge and take the first left after the river bridge. After 1.5 miles you will arrive at the northern end of the lake.

There is an FAS car park adjacent to the Warden’s cottage. Please ensure that the car park gate is locked at all times. Use the warden’s cottage entrance for access and park only in the designated area without causing inconvenience to the warden, especially at night.

There are many footpaths to the water.

The Little Pond is owned and managed by the National Trust, having been donated to them by the Atherton family. The pond is man-made and was formed when a dam was built in 1246 at the instruction of the Bishop of Winchester, the resulting 14-acre pond being rented to the monks at Waverley Abbey and used to supply fish to the court of the bishop when visiting Farnham Castle. The Great Pond was also a fish pond and was highly managed as a commercial fish farming enterprise, with the fish were harvested every 3-5 years.

Both of the Frensham Ponds were drained by the Government at the outbreak of World War II to ‘deny the enemy fixed navigational points’ that would have assisted the Luftwaffe. Following the war the Small Pond was used for tank manoeuvres and was colonised by nature resulting in a mixture of trees and bushes, military equipment, assorted incendiary devices and general junk.

Farnham Angling Society had previously had the fishing rights on both the Frensham Ponds prior to them being drained. After the war, a Major Allnat decided to sell the land where the pond had been by auction. Mr A O King the Secretary at the time, who had long been a great admirer of the former pond and had a 23lb Pike displayed in his barbers in Farnham, had persuaded the Executive Committee of FAS to let him bid for the land and they left him to try and arrange the required finance. However, these discussions had not involved the wealthy Mr Frank Atherton, then President, who himself had designs on the land . . . . .

The funding of such a purchase for FAS was in considerable doubt as we did not have the required funds, however it appears that the ever resourceful A O King clearly found a way to enable FAS to bid. Unfortunately, AOK had to attend last minute business on the day of the auction and instructed his son Hugh to make the necessary bidding. This led to Mr Atherton bidding, amongst others, against FAS. Hugh King understandably assumed that the President was there on Society business and stopped bidding ! Unfortunately for FAS, this was not the case, and at the next meeting of the Executive Committee a stormy and volatile argument took place. With the Secretary and the Executive Committee venting their anger at the actions of their President, Chairman Dick Boseley struggled to keep the meeting in check, despite the fact that they had not discussed the matter prior to the auction with the President explaining that he would not have bid for FAS because he himself wanted it. And so it was that the potential purchase of Frensham Little Pond was lost to FAS in 1949.

The cost of the subsequent works to restore the base of the pond were considerable and cost Mr Atherton £1,950, plus a further £671 on repairs to the dam and the sluice before it could even be refilled, so the purchase of the land had been only the start of the cost of the restoration of Frensham Little Pond, and perhaps it was simply beyond FAS’s capabilities at the time. Not long after the auction, despite Mr Atherton entering into a long lease with FAS once the lake had been restored, he was replaced as President by an Executive Committee that had lost their faith in him. Frensham Little Pond was ultimately donated to The National Trust by the Atherton family around 1979.