Barbel are a species of river fish belonging to the carp family. They are easily recognisable from the two barbels under their large underslung mouths, their grey colouration on their back leading to bronze coloured flanks and a cream to white belly with pale pink/grey fins and a streamlined build, they are built to endure powerful currents.

Barbel like to feed in fast gravely runs and use their powerful noses to uncover food from the river bed, spending most of their lives foraging on the river bed and feed on such things as insect larvae and crustaceans, but will eat many other types of food as well if found. If there are Barbel in your local river then it is a testament to how clean that river is as they need well oxygenated clean water to survive and breed and have taken particularly well to rivers throughout England.

Barbel have many nicknames ‘Whiskers’, ‘Barbs’, ‘River Prince’ and others, they are possibly the most sought after river fish by anglers because of their awesome power and strength. Barbel can reach sizes of 21 pounds, but an average size is about 6-10 pounds

Barbel feed primarily on the bottom and in gravelly areas. Look for holes, and features, and barbel can often be found. Much can be learnt by watching barbel behaviour in the shallows. Do not expect to turn up at a river and bank half a dozen of these fish, they can be elusive for long periods of time. It may take many visits to a venue to bank just one fish. River conditions change quickly and barbel will react to this.

The barbules and lips of the Barbel are covered in sensory cells for detecting food sources. 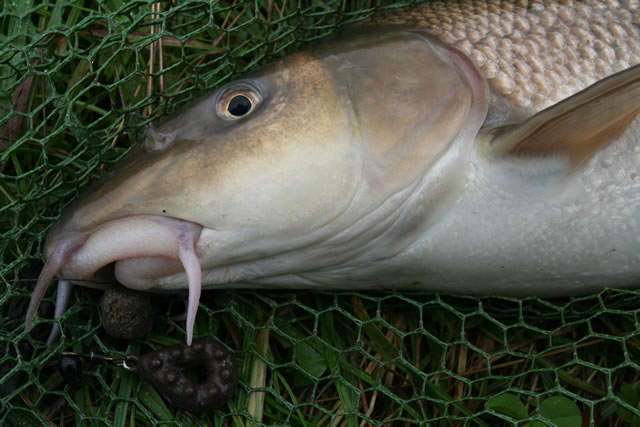 Barbel will rarely come to you, you need to seek them out using good old fashioned watercraft. Strong and balanced tackle is essential, Avon rods with a 1.5 test curve are ideal and strong fixed spool or centre pin reels are vital. Pay particular attention to lines and terminal tackle. Beef them up and ensure all knots are bullet proof. Fish for Barbel on the bottom, touch ledgering is a deadly method. Never leave a rod unattended when Barbel fishing, tales of rods disappearing into the Loddon never to be seen again are true!

Barbel respond well to many baits including luncheon meat, corn, pellets and boilies. Use a bed of hemp seed or trout pellets to entice them to feed. Maggots and casters can also work well.

Keep well back from the water line as Barbel are easily spooked by noise and be prepared to move swims often. Think carefully before fishing into snags, if it looks awkward then it probably is so consider casting elsewhere. Do not risk harming a fish.

A Barbel bite is like being shot at by a cold eyed gunslinger, often immediate and rod wrenching without any warning and the resulting scrap from these fish can be fierce. The Barbel will soon exploit any weakness in your tackle, with smashed tackle being relatively commonplace for the experienced let alone a newcomer.

Once connected, attempt to land a Barbel as early as possible. Barbel expend a huge amount of energy trying to escape your net so ensure the time that the fish is out of the water is minimal. Use a large knotless landing net and always use an unhooking mat.

Remember; always give a Barbel time to recover. Never release a Barbel straight into the main flow, and ensure the fish has had at least 5 minutes in the water to recover before completing release. If you think the fish needs more time then give it another 5 minutes. Failure to observe this means the fish can go belly up when it hits the main flow of water and it will die. This basic code is essential practice for this species and must be observed. If in any doubt or if you need more advice please do not hesitate to call the head bailiff for advice or a society official.

Where can I catch them?

Farnham Angling Society is well catered for in regards to Barbel fishing. The River Loddon at Carters Hill and Sindlesham Mill has a very good head of Barbel where the fish go to 16Ibs. For something even more special, the specimen hunter should head for the Thames at Southlea Farm.

Barbel can also be found in the societies sections of the River Wey, though maybe not as prominent as the Loddon, smaller specimens have from time to time also been caught from the River Blackwater: though they are by no means big Barbel venues.

Barbel feed primarily on the bottom and in gravely areas. Look for holes, and features, and Barbel can often be found. Much can be learnt by watching Barbel behaviour in the shallows.

Do not expect to turn up at a river and bank half a dozen of these fish, they can be elusive for long periods of time. It may take many visits to a venue to bank just one fish. River conditions change quickly and Barbel will react to this

Click here to claim a FAS Record or Specimen Fish.

Or click here to claim a National Record Fish.

Barbel spawn in wide ranging temperatures ranging from 14-20 degrees C, in late spring or early summer (between May an July), after migrating upstream, often several miles, to their spawning grounds. Males will pursue the females that are ready to spawn to shallow riffles and splashing is common as the pursuit takes place.

The females can produce 8-12,000 eggs/kg of bodyweight, depending upon their condition and health; the eggs themselves are a translucent yellow and are the largest eggs of the coarse fish in Britain. The roe of Barbel is poisonous to humans.

The eggs fall into the substrate of the spawning site and will normally hatch within 10-15-days, with warmer temperatures making this quicker. The larval Barbel are washed by the currents into the slower waters and their yolk sac will disappear after 8-days and the fry of about 7-8mm start to feed on tiny invertebrates. As they grow, they feed on larger invertebrates such as snails and also insect larvae, the juvenile fish graduate into the faster currents of the river as they grow.

As they develop into adults, the sexes reach sexual maturity at different times, with males first able to spawn at between 2-5 years and females at 5-8 years of age. Barbel are believed to live for up to 15 years.

Adults will shoal and seek refuge under weed beds, overhanging trees or behind boulders on the riverbed or under bridges during daylight, emerging at night to feed until dawn. Barbel often over winter in large shoals, remaining more active in slow-flowing river habitats.