The presence of Herons, Kingfishers, Dab Chicks, Grebe, Goosander, Bittern and other piscivorous waterfowl is entirely natural and is accepted as simply being part of the natural habitat in which our fisheries are set and that our artificially stocked fish have to survive.

That said, it would be negligent of FAS to ignore the impact of Herons that are deterred on fisheries such as Kings Pond & Wyke Pond where they are believed to have seriously impacted upon the smaller size of the fish that have been stocked and are developing in these fisheries. Herons themselves are capable of eating anything that it can swallow with fish of 1lb 8oz having been recorded as being swallowed. A quick search on ‘Herons catching fish’ on the web will provide some surprising photographs, and as well as the expected fish including Eels, frogs, snakes, mice, and even including a rabbit being caught, drowned and swallowed ! 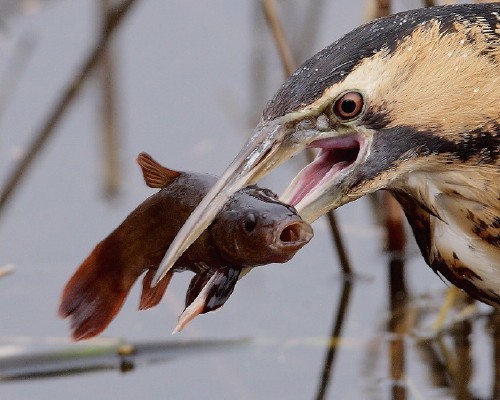 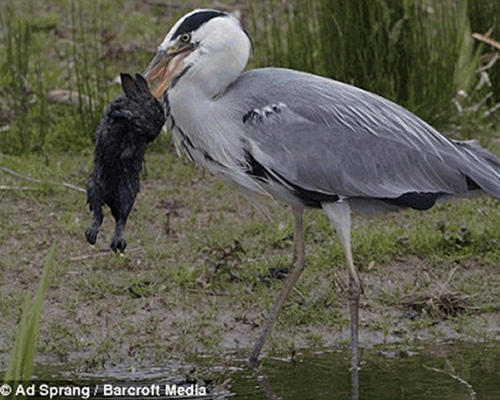 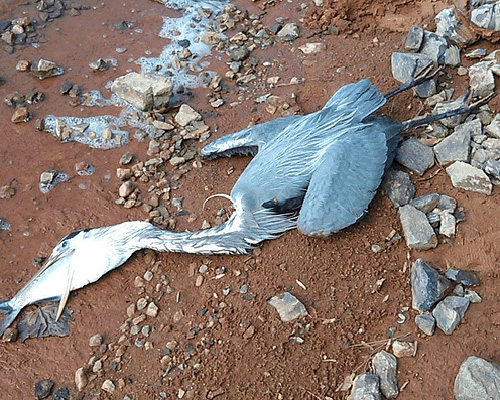 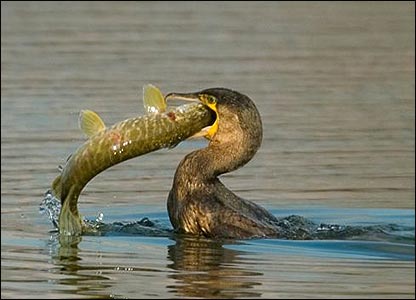 The sight of Cormorants on inland fisheries has become a phenomenon that has steadily increased over the last 20-years and had severely impacted upon the stocks of fish within many freshwaters up and down the country. The precise reasons for their leaving their usual feeding grounds is the basis of a great deal of conjecture within the angling fraternity, with discussion centring upon reduced fish stocks within the seas around our coastline, but whatever the reason the impact remains the same as the birds pursue a captive prey.

Cormorants are a well designed predator of fish, diving and chasing them underwater and with a hooked bill that they snap at fish with, whether they are able to ultimately eat them or not. Their presence, especially in winter when the numbers of anglers generally reduce on the bank and with most fish often far less active, given the birds an opportunity of easy fishing. Even if the fish survive being chased, they are often injured and subsequently more susceptible to stress and disease as they are not at their strongest.

In an attempt to counter this, FAS applies each year for a licence to shoot a number of birds and fish refuges have been installed at Stockbridge Pond and on the far bank of Kings Pond. The reflective tapes that you may also see stretched across the water at Kings Pond, Badshot Lea Small Pond and Stockbridge Pond are installed to provide a deterrent to the birds. 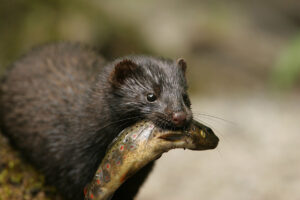 Before the ban on Mink farming in 2003, as a result of the intervention of animal rights activists, many thousands of farmed Mink were released into the wild in the UK in 1998 and 2001, this resulted in a UK population that was much higher than normal and continues to impact upon the wildlife on which they prey. Mink are not indigenous to the UK, but were introduced from the USA in 1929 to be bred for the fur trade.

Mink will have an impact on the rivers, streams and ditches that they often live along and use as corridors to travel, and they can often be seen at the stretches of the River Wey through Elstead. An adult needs several miles of riverbank as a territory and fish, particularly Eels if available, form part of their varied diet: more so in the winter when fish are slower. They also feed upon mice, voles, rats, squirrels, birds and their eggs and young rabbits. The impact on Water Voles, whose population in the UK has crashed by 90% in the last 10-years for a number of reasons including changes to farming practise and flood control, will certainly have been impacted by the increase in Mink across the UK.

The Reintroduction of Otters (Lutra lutra) 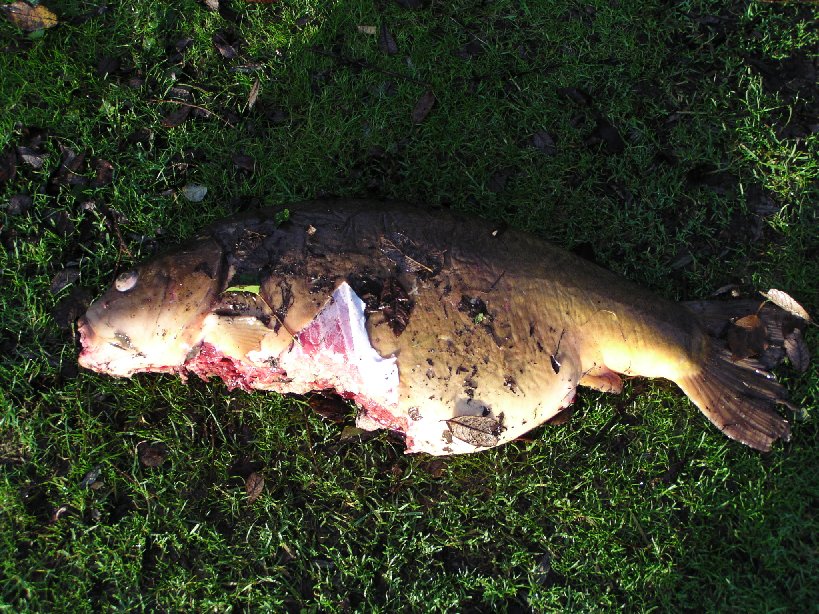 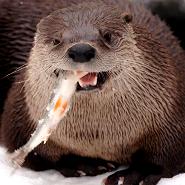 The UK population of Otters, currently a protected species in the UK, suffered very badly due to the use of DDT – dichlorodophenyltrichloroethane. This man made pesticide was widely used after the war until the 1960’s when it was realised to be having disastrous effects on wildlife as it proved to be residual within the food chain, eventually its use was made illegal in the UK in 1998. DDT was highly toxic to fish and subsequently the Otter.

We have been advised for many years by the EA that the health of the rivers has been greatly improving, so perhaps the re-establishment of the UK’s apex freshwater predator through natural colonisation by wild Otters to complete a healthy and balanced ecosystem for both wild fish and wild Otters was a worthwhile objective on the face of it.

However, the re-introduction of 117 Otters between 1983 and 1999 in lowland Britain, having been bred in captivity by the Otter Trust that has now closed due to its success, which has resulted in the successful establishment of breeding populations in many areas of the UK.

Unfortunately the Otters were released into aquatic ecosystems that had changed significantly since the demise of the Otter and Environmental Impact Assessments do not appear to have been undertaken before they were released. It appears that the pendulum may have simply swung too far and too quickly in the Otters favour as man clumsily seeks to mend by once again interfering with the natural environment. Had the Otter gradually re-colonised the UK naturally, of its own accord, then anglers would have been likely to have accepted the development.

Whilst it appears understandable that both Natural England and the Environment Agency would support and encourage the Otter’s comeback as a native species, this surely should not be to the detriment of fish such as Barbel that are themselves a European indicator species for the welfare of the aquatic environment within the UK.

The Barbel have done very well since the decline of the Otter and it is possible that with the ongoing loss of natural broodstock, the future of the species at its current levels could be severely affected for decades and it may be that the future of numbers of large fish within UK rivers has been a pinnacle that is unlikely to continue in the long term or resume in the future.

The Otters have simply done what comes naturally and fed on the fish stocks that inhabit the environment that they live in and expand into, whether they be the Barbel of rivers such as the Great Ouse, the Windrush, the Teme, the Warks Avon, the Welland and the upper Thames or specimen Carp within managed fisheries and fish farms. Either way the effects are proving quite disastrous with fish populations being devastated and some angling clubs being forced to relinquishing leases on fisheries managed for 50-years as they have lost their stock.

The Environment Agency have made limited funding available to fence fisheries (£100K nationally which is a tiny sum considering the cost of the fencing required), but this does not take account of waters on common land (such as Frenshams and Tarn Pond), where such fencing cannot be erected or where the lakes and ponds are ‘online’ (whereby they are fed by a stream and so have an inlet and an outlet – such as Frensham Great Pond & Badshot Lea Small Pond & Stockbridge Pond), and where the waterway cannot be fenced to prevent Otter access as it would simply become a dam.

In addition, the active encouragement of Otters at a time when the European Eel population is on the verge of collapse appears completely ill conceived, with Eels being a preferred natural food source of the Otter. It has been recorded in the Somerset Levels that there has been a ten-fold increase in the feather content of spraints from 4% in 1975 to 40% in 2007; the likely cause for this is the Otters ability to adapt its diet due to the collapse in the eel population.

The dilemma appears to be that the given time, a natural balance should resume, but the stocking of farmed fish by fishing organisations and the EA into both freshwater habitats will continue to provide an artificially stock level for Otters to prey upon and therefore survive in an environment that is not sustainable, therefore exacerbating the problem.

Whilst the Angling Trust continues to work with both Natural England and the Environment Agency to undertake a Scoping Assessment on the impact of Otters on fish stocks, there is serious concern that this is 10-years too late. Meanwhile the construction of otter holts by the Surrey Wildlife Trust working in collaboration with the EA has taken place locally to FAS fisheries, with 4 on the River Wey between Elstead and Eashing and 2 on the South Wey at Tilford, with the consent of landowners but without consultation with the local fishing clubs.

It really depends on how you look at the situation, purely as an angler who wants the maximum fish stocks to be available or as an environmentalist who wishes to see a natural environment. But in truth, how natural is the environment when it is steered by human interference at every single opportunity ?

That said, Farnham Angling Society will continue to monitor the situation closely and seek to protect its fish stocks where possible.

Human development and the affects of river fish habitat and their future recruitment.

The management of the rivers systems for flood protection and for use by boats has a direct impact upon the spawning grounds through the removal of suitable substrate and spawning grounds as well as putting obstacles that inhibit migration to spawning grounds leading to little or reduced recruitment.

A barrier such as a weir is impossible for a fish to bypass, with the possible exception of Salmon, and they create considerable changes to flow rates as well that again affect the natural environment of the river system. The effects are not of course always negative, and as is the way of nature, different species will usually acclimatise to a gap that occurs.

The Environment Agency is responsible for both the management of flooding and for the protection of the habitat of the river and preserving it wherever possible. Different departments within the EA may seek different objectives, such as Flood Control and Fishery Management, but they seek to manage this difficult process through a series of policy based decisions and advice to developers throughout England & Wales.